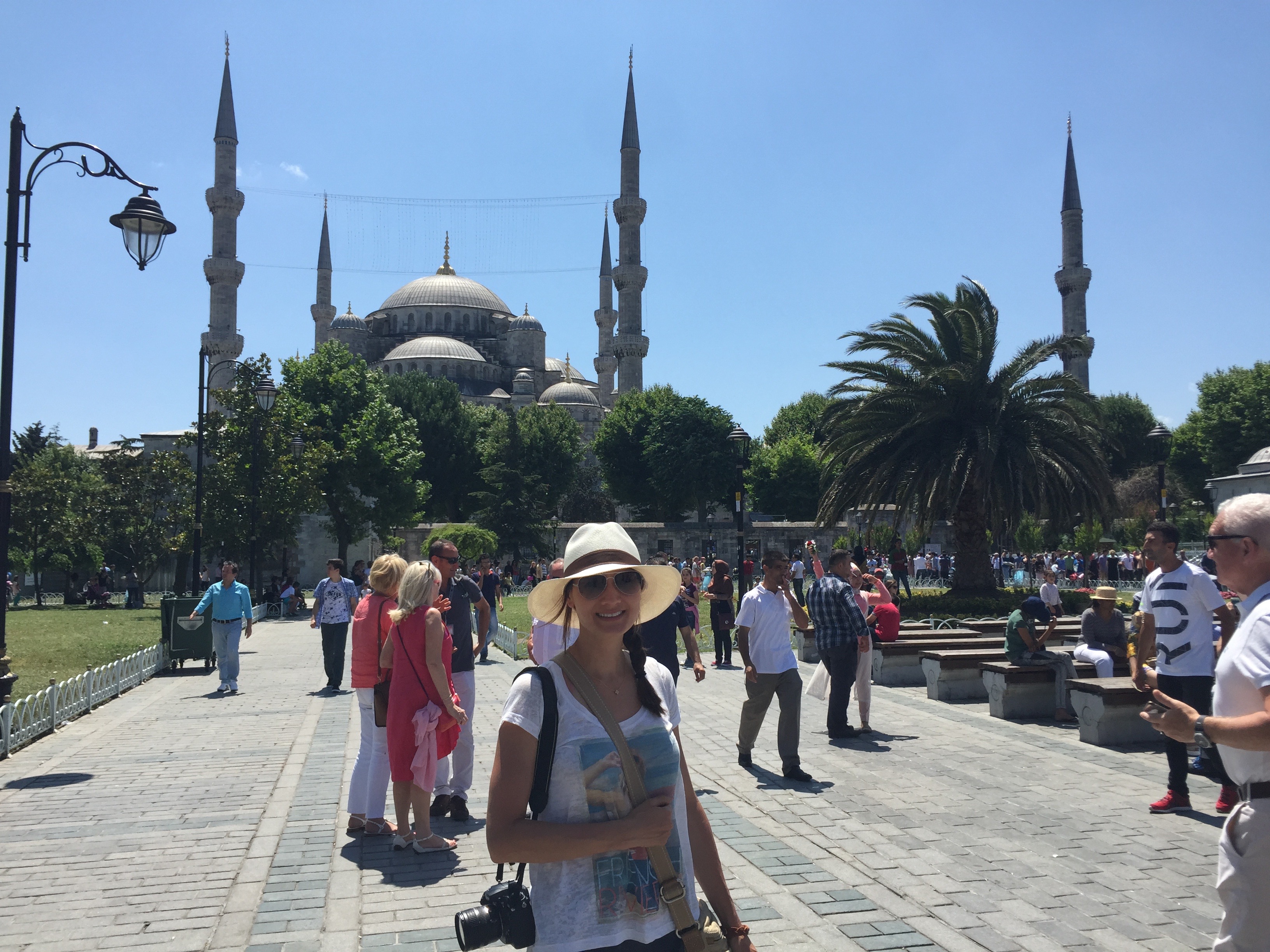 I spent two days in Istanbul and loved every moment of it. Now I understand why it’s considered the gateway to Asia. This city is a feast for the eyes and it’s the perfect combination of new and old, West and East.

When we first arrived, we took a tour along the Bosphorus, which divides the city of Istanbul into two continents… Europe and Asia. There is a massive suspension bridge that crosses over the straight, connecting the two continents of this beautiful city. While you can’t miss the dozens of mosques that dot the cityscape (according to my guide, there are 2990 in Instanbul alone!), you also can’t miss the multi-million dollar waterfront properties, which used to be residences of former sultans from the Ottoman Empire. While Turkey is 98% Muslim, in 1923, it became a secular republic with Mustafa Kemal Atatürk as its president. This man reformed the country both politically and socially – giving women rights – and today, he remains the country’s hero… all of my tour guides (both men and women) could not say enough good things about him.

But I digress… back to my first day in the city: We stayed at the Pera Palace Hotel, which was originally built in 1892 and recently restored to its former grandeur. Stepping into the lobby and sitting down for Turkish tea and coffee at the patisserie transports you back to another time, when it was a stop for passengers on the Orient Express (a train that ran from London through Europe and ended in Istanbul). The hotel has a lot of famous former visitors, including author Agatha Christie, who wrote Murder on the Orient Express, in room 411 in 1934. Greta Garbo, Alfred Hitchcock and even the country’s hero and former president, Ataturk have walked its halls. I loved the 19th century furniture and designs combined with all the modern amenities… a great renovation!
On the first day, we took an afternoon tour with our guide, Servet (which means “fortune” in Turkish). This man could not have been nicer or more knowledgeable (and he was very proud to tell us Americans that he took Maria Shriver and her family on tour in Turkey back in 2008). He was also equally proud to tell us that he has never lost anyone on a tour and in this crowded city of approximately 15 million… that’s a good thing!

Our first stop was right outside the Blue Mosque where Servet pointed out a group of undercover security officers wearing ear pieces, standing next to the Obelisk of Theodosius, which was brought to Istanbul (then Constantinople) in 390 AD. Servet showed us the beautiful German Fountain that is still used by locals and took us through the Blue Mosque and Hagia Sophia. There is WAY too much information to share about each place, so I’ll spare you the details and simply share some pics that I shot from the ornate and incredible structures.

Our second day included a 2-hour walk from the old city to the new city with stops at small shops along the way. I picked up a couple of pairs of earrings, two evil eyes, and two silk scarves. The Topkapi Palace is a must see, with its grand entrance, opulent interiors and expansive gardens.

Back at the hotel, we spent some time at the indoor pool before heading to dinner on the Bosphorus at the Ciragan Palace, a Kempinski hotel (this hotel chain is my new favorite!). The hotel is right next to The Four Seasons and while both are lovely and posh, the Pera Palace has a lot more history and was a great choice.

If you haven’t been to Istanbul and you have the chance… go! This place is completely worth the 15-hour plane ride.

Medieval castle on the Bosphorus

Waterfront properties on the Bosphorus

Mosque on the banks of the Bosphorus

View from the Bosphorus

Since I forgot a scarf and was wearing shorts, I borrowed a scarf and full body cover at the entrance to the mosque

Interior of the Blue Mosque

Beautiful ceilings of the Blue Mosque

Interior of the Hagia Sophia

Looking up at the beauty of the Hagia Sophia

The Grand Bazaar was closed because it was Ramadan… good reason to go back to Istanbul!

One of the beautiful mosques in the old city

Never thought I’d find someone who I could talk

While I LOVE a good tan, I’ll trade in that heal

There’s a reason why Momma Chan would wear a lot

✨Sparkle and Shine✨ I’m pretty sure every w

In honor of Rainbow Bridge Remembrance Day, I want

Focus on the light ✨✨✨ Wedding planning is

If you’re an American heading to Paris, here are some items you’ll want to pack: Walking shoes (this is a …
Read More

If you get the chance to take a day trip to the Champagne region of France, you should go! The …
Read More

Showered With Love; A Pre-Wedding Celebration

There was plenty of sunshine and lots of love at our pre-wedding celebration over the weekend. Since the man and …
Read More

Four Reasons to Stay at the Nevis Four Seasons

I recently I shared that I take CBD everyday…twice a day…and I got lots of questions about why. So here’s my …
Read More
Let's Stay Connected