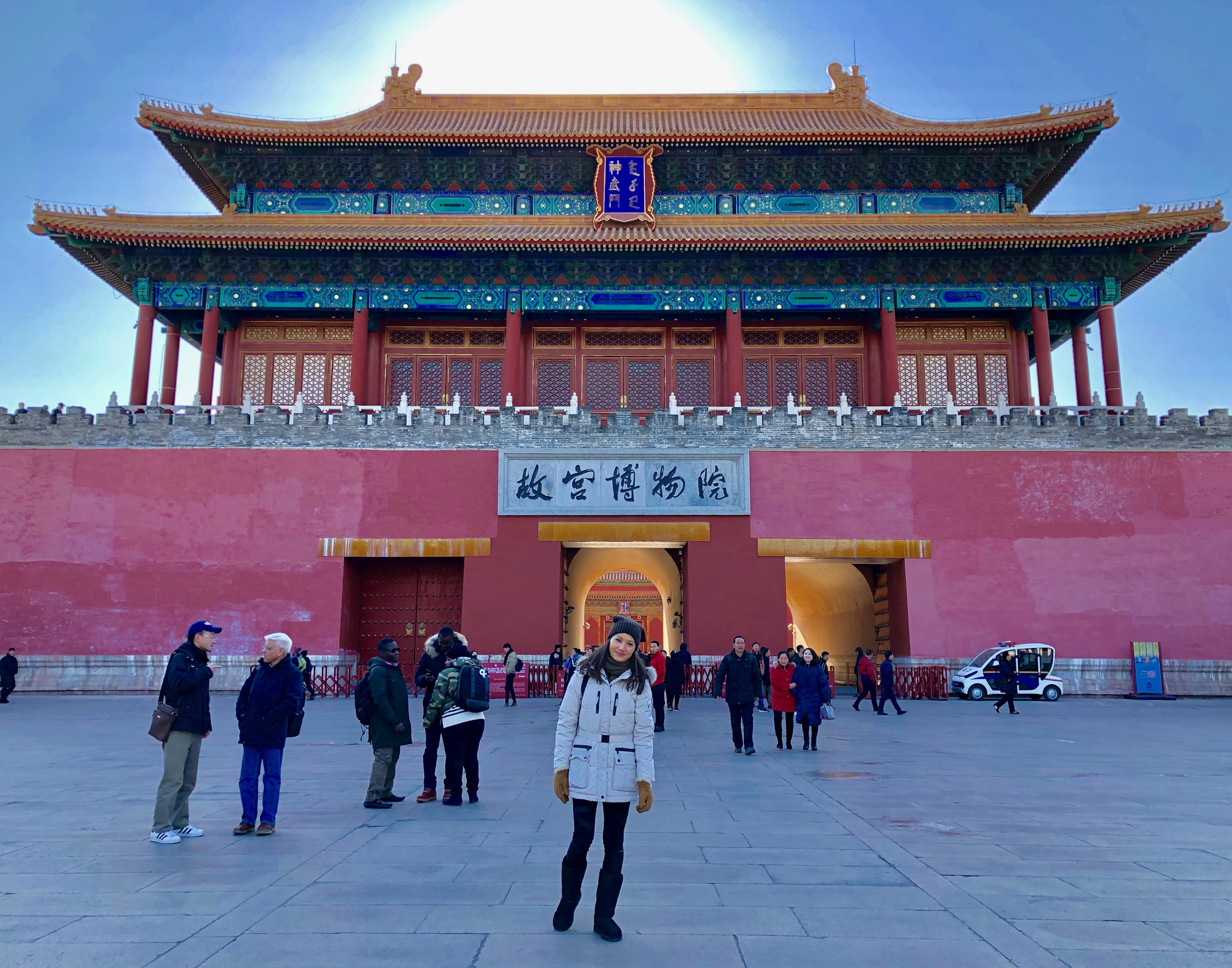 Posted at 02:59h in Fashion Blog, Life of Liberte, On The Radar, Travel by Liberte Chan 0 Comments
0 Likes

If you read my last blog post or follow me on social media, you would know that I went to China for a family reunion trip in December 2018. In addition to going to the motherland to connect with my roots, I also went to tour places in China I have never been like the Great Wall in Beijing, Shanghai and Xi’an.

I also visited Hong Kong, where my mom lived as a child. While this was not my first trip there, returning to Hong Kong this time confirmed that the island still has my heart.

Here are a few highlights from my visits and suggestions that may help you plan your next trip to China.

Beijing was a mix of old and new, with a must-see visit to the Forbidden City (where Chinese emperors lived from 1420 to 1911) and culinary feasts at high-end restaurants and window shopping at massive malls with every luxury brand one could want.

We stayed at the recently renovated Peninsula Hotel and it could not have been more luxurious or beautiful.

The pollution was less than ideal when we were in the city; I immediately got a sore throat and my eyes burned for three days while I was there, but when we visited the Great Wall (located about an hour drive outside the city), we were blessed with blue skies and lots of sunshine.

A note on social media: The regime blocks all social media so unless you have a VPN or a sweet cousin (like I do) with passwords to your accounts back in the U.S., you will not be able to post on Instagram or Facebook.

The Great Wall was built 2000 years ago and it took 200 years to build. When we visited the monument in December, temperatures were in the low 20s

I arrived in Shanghai at night and the lights and massiveness of this mega-metropolis took my breath away. The over-the-top luxury is electrifying. Whether you’re a foodie, a contemporary art buff or you just love looking at lights, Shanghai does not disappoint. Shanghai is the most crowded city in China and the most populated city in the world with an estimated 24+ million people. The city is referred to as Paris of the East and some say it is like New York on steroids. In my opinion, there is no comparison, because that would be like comparing a baby to a grown adult.

The Huangpu River divides central Shanghai into two areas. On the western bank lies the Bund– a stretch of neoclassical and Art Deco buildings that were erected from the mid-19th century to the 1930s. Across the Bund is the eastern side of Shanghai, known as Pudong.

We stayed at the Ritz-Carlton in Pudong. There, from the club lounge level, we could see the view of the Bund at night and watched the impressive nightly light show. Both banks are stunning and said to be the most photographed urban panoramas in China.

I highly recommend stopping by the spa at the Ritz-Carlton Shanghai, Pudong. I took this picture before falling asleep during my deep tissue and hot stone massage. The round, futuristic building behind me is the Oriental Pearl Radio & Television Tower. At over 1500ft high, it was the tallest building in China until 2007 when it was surpassed by the Shanghai World Financial Center.

Practicing yoga next to the indoor pool on the 53rd floor, Ritz-Carlton Shanghai

I was lucky enough to spend a day in Xi’an – the cradle of Chinese civilization, which was the country’s ancient capital city. Xi’an means Western Peace. China’s first emperor lived, ruled and died there more than 2000 years ago. He was buried along with his army of 8,000 terra-cotta warriors who were meant to guard him in the afterlife. Three farmers accidentally discovered the soldiers in 1974. Shortly after, excavation began and it continues today. The museum has three pits where you can see the soldiers. Pit 1 is massive – the size of about two football fields – and has 6000 soldiers standing in battle-ready formation. All of the warriors are life-size and each one has distinct features… none of them look the same from their faces to the palms of their hands! All of the soldiers were found in pieces except for one, the Kneeling Archer, which remains intact.

Aside from the terra-cotta soldiers, Xi’an is known for its tasty food. If you go, try the dumplings and wheat noodles with persimmon vinegar sauce. So tasty!

We stayed at the Ritz-Carlton and the Peninsula Hotel in Hong Kong. Both were amazing and each one was beautiful in its own way. Here’s what I loved about each one:

Ritz-Carlton, Hong Kong: This is the tallest hotel in Hong Kong, where the gym and pool are located on the 118th floor, literally sitting in the clouds above the harbor. If you stay here, I would highly recommend staying on the club level so you can enjoy food and beverage at your leisure and on your timeline (it’s just like going to your kitchen — but better – if you were at home).

Indoor Pool on the 118th floor of the Ritz-Carlton, Hong Kong

Making shapes in the window on the 118th floor of the Ritz-Carlton, Hong Hong

All dressed up and walking through the Glittery Golden Corridor at The Ritz-Carlton, Hong Kong

The Peninsula Hotel, Hong Kong: The Peninsula is the oldest hotel in Hong Kong, serving guests since 1928. The luxurious hotel has a fleet of Rolls Royces parked outside and has served an array of elite and glamorous clientele over the decades. Afternoon tea at the Peninsula is a must and I’m happy to say that even vegans can enjoy a light and tasty meal. Guests of the hotel can either choose to sit in the lobby or dine on the 28th floor of The Peninsula Tower with views of Victoria Harbour as the backdrop.

The lobby steps at the Peninsula, Hong Kong

Learning Tai-Chi at The Peninsula with William Ng

Victoria Peak, Hong Kong: The Peak is Hong Kong’s most popular tourist attraction and for good reason. The Peak Tower and viewing platform sits 1,300 feet above sea level and gives you a panoramic view of the skyscrapers from Hong Kong Island toward Kowloon.

Travel Tip: When you visit the peak, take a taxi to the top (avoid the long line at the bottom of the hill) and take the peak tram down. You’ll save a ton of time and still get to ride on the historic trolley that was originally built back in 1888.

Repulse Bay, Hong Kong: This is where my mom lived as a kid. We visited her childhood home with one of her sisters and my cousins. The beach was within walking distance from their front door. Her family owned the building and they lived on the top floor and rented out the other floors to other families. While it looks a little different, the structural integrity remains the same.

Never thought I’d find someone who I could talk

While I LOVE a good tan, I’ll trade in that heal

There’s a reason why Momma Chan would wear a lot

✨Sparkle and Shine✨ I’m pretty sure every w

In honor of Rainbow Bridge Remembrance Day, I want

Focus on the light ✨✨✨ Wedding planning is

If you’re an American heading to Paris, here are some items you’ll want to pack: Walking shoes (this is a …
Read More

If you get the chance to take a day trip to the Champagne region of France, you should go! The …
Read More

Showered With Love; A Pre-Wedding Celebration

There was plenty of sunshine and lots of love at our pre-wedding celebration over the weekend. Since the man and …
Read More

Four Reasons to Stay at the Nevis Four Seasons

I recently I shared that I take CBD everyday…twice a day…and I got lots of questions about why. So here’s my …
Read More
Let's Stay Connected